A Harlequin, or alrecchino, is most commonly recognized as a comical character from the famous theatrical performance, the Italian Commedia dell’Arte. The first appearance of the harlequin was during the 16th century. There have been a number of theories attempting to describe the origins of the harlequin, which really adds to his mystery. Some say the harlequin came from Italy, while others believe he was originally French.

The general idea of a harlequin is a slow-thinking yet energetic figure. He has been associated with stupidity but throughout history, the harlequin has proved to be lively and witty. He was an entertainer, an acrobat to be more specific. He would never resort to simple and reserved acts of entertainment. He was the one performing the back flips and other acrobats as well as putting himself in mischievous situations. In other words, he possessed a very clown-like persona.


The arlecchino was a subservient character in all of his acts. One will immediately recognize the harlequin due to his colorful outfit that was created with patches of diamond checkered fabric. Typical colors of a harlequin outfit are blue, green and red. The harlequin mask is the most significant aspect of the ensemble. The mask is usually black or white and has a low forehead along with a wart. It is meant to cover the eyes and the area around them only. These masks were often accompanied by jester hats that had bells attached at the ends. As the harlequin would walk around he would carry a slapstick with him too.

Arlecchino usually had a love interest by the name of Columbine in the Commedia dell’Arte, but he was not always able to woo her. He was a poor soul often hungry for food and thirsty for lust. While he was physically alive and energetic, his mind was rather sluggish. He could not multi-task in his mind and his thoughts were limited. In the Commedia dell’Arte, the harlequin falls for a number of strange traps that he brings upon himself.

The high-spirited and clever harlequin often appears in theatrical performances known as harlequinades. He is always caught in tight situations and is never the one to seek revenge. He often wears a black mask that he can lift in order to reveal himself.

The character of the harlequin has evolved numerous times over the centuries. The 18th Century, however, brought an end to the fantasy and witty characteristics of the harlequin. He became less complex and more one-dimensional.

The Harlequin reappears in modern culture in literature, music, cinema and celebrations. Pop culture has really embraced this acrobatic figure in movies such as Moulin Rouge and Batman. The Mardi Gras in New Orleans is a popular arena for venerating the story and character of the harlequin. They are still dressed in diamond patterned one-piece outfits and decorative masks. The masks are often covered with feathers and decorations. The harlequin masks cover the true identity of the figure behind it and it represents the complex nature of the persona. No one could ever really understand the harlequin.

Clicking the links below will open a new window in your browser with a full description of the Peacock Masquerade Mask for sale on eBay.

Venetian masks were originally designed for all sorts of entertainment and games for the ruling class as well as lower classes. The masks held a symbolic purpose of disguising ones identity but they also served more functional purposes. Many of these purposes revolved around promiscuity, crime and other illicit behavior. Others wanted to free themselves from judgment and strict moral codes.

The creation of thousands of masks would not have been possible without dedicated Venetian mask-makers. Also known as maschereri, these artisans were official members of a guild dedicated to crafting Venetian masks. They created various styles and shapes and decorated these masks with distinct features and aesthetic designs.

There are three major types of Venetian Masks—the Bauta, Larva and Moretta. The Bauta was worn by men and women and was attached to a black mantle as well as a tricorn hat. The mask itself is white and completely covers the face, making it difficult to eat and speak. This was the ideal mask for the most mischievous behavior. The Larva, or Volto, is similar to the Bauta in that it is covered in white paint. These masks were made of fine wax cloth and were lighter in nature. The wearer can comfortably eat, drink and dance while remaining anonymous. They resembled a ghost lurking in the depths of the night. The Moretta was a black mask worn by women who visited convents. They held the mask in place by biting on to a button in the mouth. This prevented them from speaking.


Venetian masks range from half masks, full face masks as well as head masks. Each one is distinct in shape and style. Head masks are attached to head pieces and other parts of the costume while full-face masks and half-masks are detachable. Full-face masks and head-masks are also more elaborate and decorated. They were the preferred choice among the troubling types. The more the face is covered, the more mystical the wearer becomes. 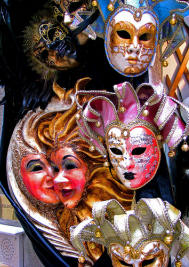 The modern revival of masquerade masks is deeply rooted in craftsmanship and the artistic qualities of the masks. While these agents of disguise originated in Venice they have been welcomed in other parts of the world including the rest of Europe and the Americas. Each region has its own style and culture surrounding these masks.

When masquerades were popular, Venetian mask-makers, or maschereri, established a guild in the early 15th century and began producing decorative masks. Attention to detail was a critical part of creating these masks and there was a range of types and styles.

There are three different types of masks including the Bauta, Moretta and Larva.

The original mask was created by Venetians and the mask-makers used two different methods. Papier mache was the first method which combined glue and paper strips to form the shape of the mask. These masks were generally designed to be held by a stick and to only cover the eyes. In order to create full-face masks, the artists used clay to produce molds. The mask-makers applied specialized paint and added all sorts of decorative elements including gems, beads, ribbons, natural feathers and dazzling gold leaf.

Color was a significant part of the design. Bright blues, reds, yellows, oranges and greens were the most common choices. Generally, males would wear darker colors while women would wear lighter ones. Customized masks were also possible, resulting in a vast array of unique masquerade masks. The masks were accompanied by highly elaborate and ornamental masquerade costumes during the celebrations.

The original masks were symbolic and simple. Over time, masquerade masks became more and more complex. Masquerade masks have not only been used for entertainment but they have also allowed people to hide their identities in order to participate in various activities including romantic ventures and even crime.

Every masquerade mask is distinct in shape and style, and it is common to match the color of your mask with the rest of your costume or clothing. Find the perfect black mask to wear during Mardi Gras, Carnival, or a masquerade party by browsing the many types of black feather masks below.

Clicking the links below will open a new window in your browser with a full description of the Black Masquerade Masks for sale on eBay.