The Story of Venetian Masks 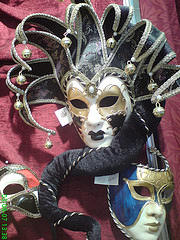 The masquerade mask of Venice is the cultural symbol of the city. Travelers now flood the piazzas and canals of Venice searching for the mystical culture that once filled the air. These expressive and decorative masks are part of an entire festival that holds strong historic ground. The story of Venetian Masks dates back to the 13th century and has recently revealed a revival of the tradition.


The medieval court life of Venice strongly embraced a series of processions and festivals. Masquerade balls were one of these celebrations that were originally intended for the upper classes. Over time, these masquerade balls entered the public realm and allowed members of the lower class to disguise themselves as well. The nobility also enjoyed the aspect of hiding their identities. This allowed them to participate in promiscuity, decadence and all sorts of activities that were against the rules. In turn, the lower classes were able to disguise themselves and be free from the social stigmas of the time.

Soon, this sort of behavior became unacceptable for the Catholic Church. The Church attempted to ban the processions and festivals on numerous accounts by implementing regulations and passing strict laws against certain behavior. However, the wealthy class of Venice had enough influential power to persuade the Church in accepting the celebrations. As a result, the days between Christmas and Ash Wednesday, or Shrove Tuesday, were dedicated to the festivals and the entire city of Venice was covered with people disguised in masks.

The festival was also known as the Venetian Carnival and it had a great impact on the lives of people. A celebration of hedonism was at its best during this time and people acted with liberty as much as possible. Sooner or later, people began to wear masks on days outside of the months that were prescribed by the Church. The aristocracy took advantage of the inability to distinguish one person from the other. They continued to go against the moral and political standards of the time and participated in unlawful affairs. Being anonymous had its benefits and the celebrations and entertainment were difficult to oppose by the majority of people.

The masquerades were the most popular between the 15th and 16th century. Young venetians would gather and wear specific outfits and cover their faces with masks in order to perform in shows and entertain viewers during the Carnival of Venice. These performances were based on religious, political and marital stories. They were entertaining for the nobility and allowed a sense of relief from the oppressive powers of the Church for the general public.

The splendor and fun came to an end during the 18th century when the Venetian Republic began to decline. The tradition of masquerading and wearing masks dwindled as a result. Both the Austrian government and the fascist government of the early 20th century banned the Carnival. The modern era in the late 20th century witnessed a restoration of the excitement and whimsical nature of Venetian masks and masquerades. Now, tourists and Venetians alike can participate in Carnival and become part of the lively culture that surrounds the historic and traditional symbolism of the Venetian Mask.

Clicking the links below will open a new window in your browser with a full description of the Venetian Masquerade Mask for sale on eBay.