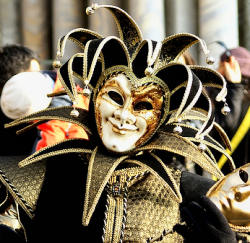 The harlequin has been a central character in many theatrical performances including the Commedia dell’Arte and is one of the more mystical and fantasy-like characters in literature. The origin of the harlequin dates back to the 16th century. He is distinctly known for his dynamic outfit and personality.

Dressed in a colorful diamond checkered outfit with alternating colors, the harlequin jumps around without ever revealing his true identity. His outfit can either be symmetrical or asymmetrical and is usually brightly colored.

He is always found wearing a very distinguishable mask that only covers the top part of his face and has a low forehead. The first masks of the harlequin were quite primitive in their physical qualities. This paralleled the character of the harlequin as a figure outside of the norm. Therefore, he needed a more socially recognizable image.

Over time, these masks evolved into more sophisticated ones as his character evolved as well. Once the harlequin was less anarchic and more witty, his masks began to be more stylized.

The first harlequin masks were made of wood and the ones that appeared later were constructed with leather. The features of the mask are cat-like with small round holes for the eyes. The eyebrows are curved, expressing a mischievous quality. The nose is also quite small. A harlequin is found usually with a stocking that covers the lower portion of his face. Today, harlequin masks are colorful and elaborately designed with different materials including beads, feathers, glitter and colorful paint.

The harlequin is a figure of contradictions. He is witty at times but rather slow-thinking at others. He can be clumsy but gracious during his acrobatic stunts. His outfit and appearance are quite rugged but his physical qualities are sleek. To think that the harlequin is simple is actually a mistake.

The links below will open a new window with a full description of the Harlequin Mask for sale on eBay.